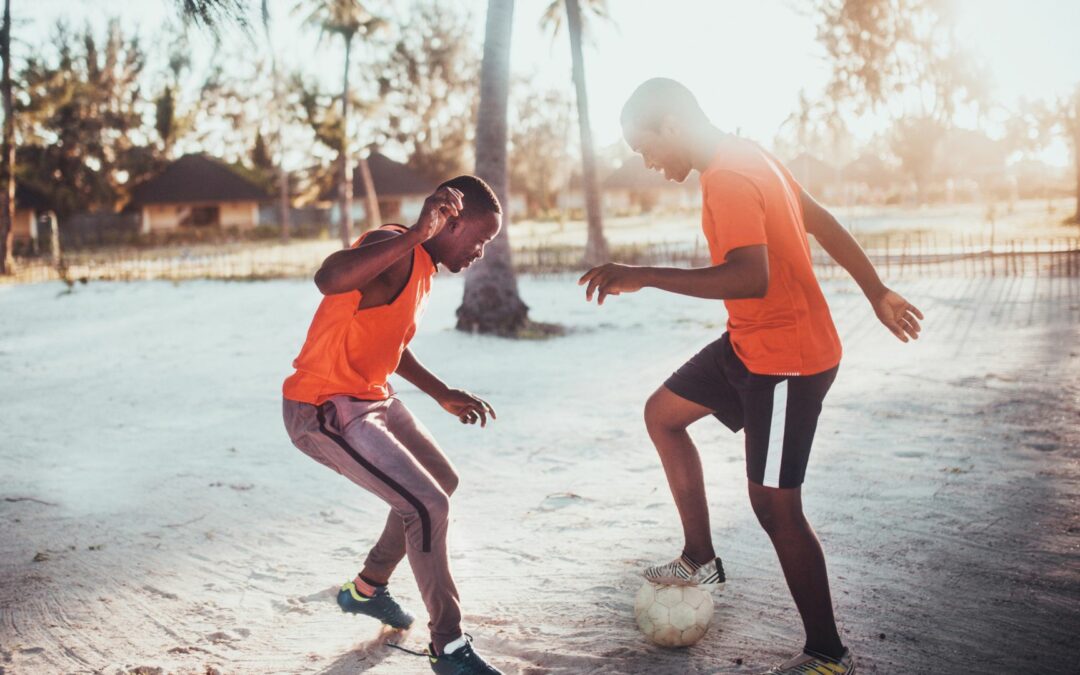 Abu’s method to live out Christ’s love on the football field in Zanzibar, Tanzania, is simple: ‘pray, play and say.’ Before each football practice or fitness training session, Abu calls together the players, asks what everyone is thankful for that day and prays for the day. During scrimmages, drills and games, Abu ensures he plays with integrity. Lastly, what Abu says to the players is said with love. Through this three-prong approach, Abu has seen the young men he interacts with open up to the good news of Christ.

Saleem*, from a Muslim background, was one of them. Saleem saw that Abu not only instructed the players on how to act and behave but led them by example. He regularly visited Abu and three months after he started reading the Bible, he decided to follow Jesus.

‘DECIDE’
Abu, like Saleem, is from a Muslim background and came to know Christ through football. When Abu’s father, a sheikh, passed away, he was sent to study Islam so he could one day be the sheikh for his area. After graduation, he began working for his grandfather’s business.

Through football, Abu met Robert, a Jesus follower. Robert invited Abu to play in a football tournament on the condition that Abu changed his name—Abu was obviously a Muslim name, and churches ran the tournament.” So, he gave me a name: Johnson,” recalled Abu. He joined the team, and, through team devotions, the other players and the church’s pastor, he learnt about the Bible and that Christians were not the enemy as his Islamic school had taught.

Then “Jesus started to come to me Himself,” remembered Abu. A voice would come and say: ‘Decide.’ Sometimes when I slept, I dreamt of the voice.”

He began to dream about different Scriptures, and one night, as Abu fell asleep: “I saw somebody appear from the light. Then the first question He asked me was: ‘Who are you?‘ I asked Him: ‘Who are you, too?’ He said: ‘I am a King… you are a son of a King.’” Abu remembered the conversation continued for a long time, talking about suffering for the King and seeking the Kingdom before anything else, as it says in Matthew 6:33. Having been chasing money since he left the Islamic school, seeking the Kingdom of God first was a foreign idea to Abu.

Unable to sleep, Abu ran to the church and found the pastor praying out loud for him by his fake name ‘Johnson,’ and calling him “my son.” This simultaneously angered and touched Abu, who had been missing a father figure for most of his life. The pastor reminded Abu that Jesus loved him and selected him from among millions of Muslims.

BRIDGED BY A NAME
Having spent years studying the Qur’an, Abu dug into Scripture. “I didn’t want to hear the teachings of Islam anymore; I needed to dig for myself,” Abu explained. “I committed myself to read the Bible not only to know Jesus, but I wanted to know my purpose.”

After a year, Abu decided to be baptised. People from the church suggested he be renamed ‘Paul’, but Abu said: “No, I don’t want to have a Christian name. I need to be baptised with my name.”

Receiving a new name at baptism is a common practice in Tanzania as names inform others what faith the person was raised in. “When you meet someone,” Abu explained, “you know what they believe in by their name. So, if I meet you and I hear your name is Abu, I’m like, oh, he’s a Muslim.”

“Now my name became a bridge to connect easier with my Muslim friends,” said Abu.

Multiplication of groups of Jesus followers is happening! Just as Abu was taught to ‘pray, play and say’ through sports, he equipped Saleem to do the same. Saleem will, in turn, teach others likewise, multiplying the love of Christ on the football field and beyond.