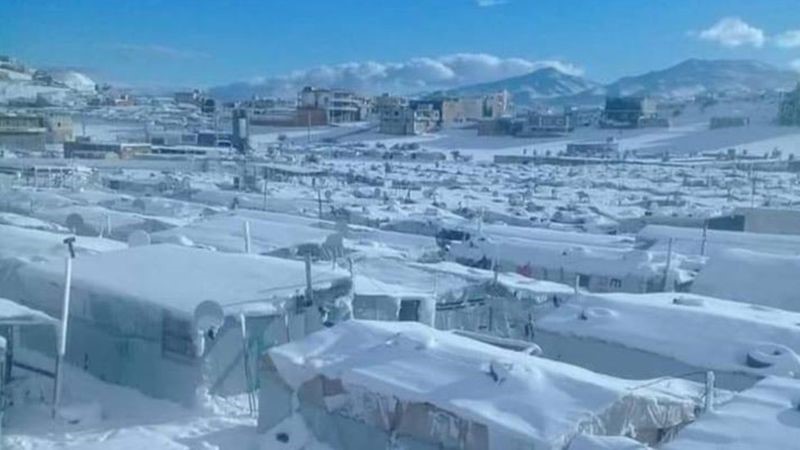 There are more than 1,5 million Syrian refugees in Lebanon.

Storm Norma hit Lebanon with heavy rains, snowfall and freezing temperatures over the past week and weekend. It has damaged several Syrian refugee camps in the country. Thousands need emergency assistance and many refugees had to spend the night standing up. Some families were stuck in tents under the snow. At least 66 camps were heavily impacted by the flooding, 15 of which have been completely flooded or collapsed.

One Christian NGO worker reported: In the afternoon I get in my car and I drive to visit some camps to see what damage has been done and if I can offer any assistance. I drive past camps and see mattresses and blankets draped on fences to dry if only the sun would come out from behind the angry looking storm clouds. I arrive at one camp and greet a few friends on my way in; their cheeks are bright from sitting in their overly warm tents and coming out into the contrasting cold. As I walk in the camp I speak with some people: tents have flooded because of the storms. In between showers of rain and snow, they were using a pump to get the water out of their homes. One family had a storeroom of food and extra bedding, the bedding can be dried out, but the food is destroyed. I see women working quickly, trying to squeegee out their floors. A woman shared with me that they woke up on a drenched mattress and didn’t sleep the rest of the night.

The UNHCR reports that 117 informal settlements were affected by this storm, 156 families evacuated and relocated the first day of the storm, 16 families relocated the second day, and 17 more the third day of the storm. These families remained in relatives’ or neighbours’ homes, school buildings or community centres until the storm subsided and the water in their tents could be pumped out.

I walked into a second and third camp and spoke to people. I watched children running to each other’s tents in sandals despite the wet, muddy freezing temperatures. Sandals are affordable and can be worn year-round; boots are expensive and can only be worn for a few months. A woman tells me that she is so glad that the storm was not just snow because snow is heavy and breaks roofs. She thinks it is easier to deal with the water flooding in and the muddy streets than a broken roof. Some of the tents are like shacks, so the winter snow is heavy on the roofs, and some of them had their roofs collapse on them, so they had to find refuge in neighbouring tents and they had to rebuild, again.

Men wandered around aimlessly as my friend told me that it is very hard for them to find work in the winter when the weather is bad. Normally, refugee men from camp work manual labour jobs, in the fields or in construction, but when it snows all this work is halted, as is their income.

Winter is a very difficult time in the refugee camps. Families are stuck inside, homes are constantly dirty from the mud tracked in, men cannot find work, they fight a recurring battle against water flooding in, or roofs caving in from heavy snow, it is cold, the small stoves they use can be dangerous for burning children and for catching things on fire.