I would never be a Christian 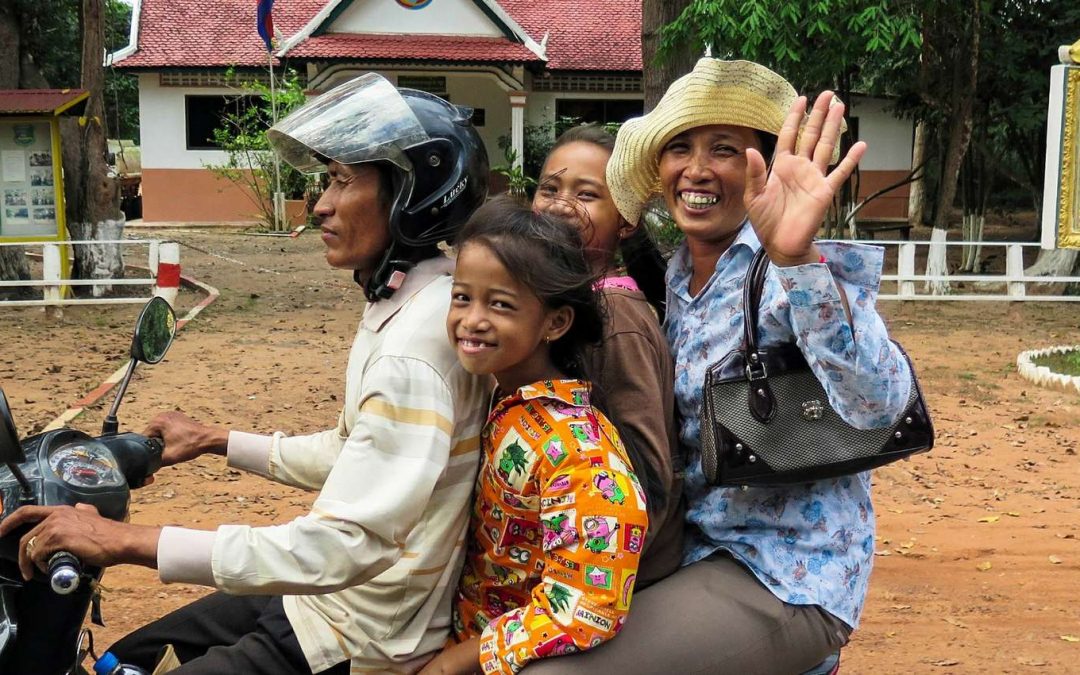 Pastor Vachna grew up in Neak Loeung, a market town on the Mekong River, about 40 miles southeast of Phnom Penh. In 2001 a small team of OMF missionaries began working there, starting the music classes that drew Vachna to the church. After studying at the Royal University of Agriculture, Phnom Penh, Vachna spent three years at the Asian Theological Seminary in the Philippines. Today Pastor Vachna leads the church in Neak Loeung and is Chairman of the Fellowship of Churches of Cambodia.

“I decided to go the class, despite the believers. I prepared myself: I would be very careful if I needed to join in any Christian activities. Unfortunately, we needed to pray to the Christian God at the start of class. I prayed, but only for the sake of playing guitar. I told myself that I would never be a Christian.

A COUNTER-CULTURAL WAY OF THINKING
I was invited to join a Sunday service; it was not a class requirement, but I wanted to see how Christians worshipped their God. The message was very interesting. It was about the offering from an old woman in Luke 21:1–4. It was an eye opener for me. What I had learned from Buddhism was the more we offer to god, the more we learn righteousness. Yet Jesus considered what the poor woman offered the most among the offerings.

I decided to learn more about Christianity. I allowed myself to be more exposed in the Christian group and got involved in ministry. Soon enough, I decided to accept Jesus as my personal Saviour.

MY CHALLENGE TO GOD
After some time, I sensed God’s call to be a pastor. I had no idea what or who a pastor was, but he seemed to be the head of the church. It sounded great to me. I went through some training and deeper involvement in ministry.

It was then I realised that the pastor was a nobody. He would have no recognition in Cambodian social status and even no salary. I wanted to drop back, but I knew it was never right to live against God’s will. I would follow God’s will. Thus, I found a way to affirm God’s calling for me. I made a deal with God: if someone from my family became a Christian within one year (it was also my last year in college), I would accept the calling.

GOD PROVED HIS EXISTENCE
I started praying for everyone in my family (two of my brothers were already converted). My oldest sister, youngest brother and my mother were closer to me than my father. Besides, he was a medical doctor; he would never believe in any spirit or supernatural god. So, I prayed for the others more than my father. I had been praying for almost one year, but nothing happened. My family seemed not interested at all. I was very upset. I wondered whether to extend it another year for God to work.

The last Sunday of the year arrived; we celebrated Christmas and all of my family was invited. After the message, the speaker invited the audience to accept Christ. In my heart I was shouting so loud, “Come on Mother, it’s your last chance of the year!”

I could not look up. I was very nervous as to whether anyone on my prayer list would accept Christ. I said in my heart, “Mother! Mother! Mother!” None of my family would respond, except my father. Unbelievable! I could not understand why God had worked that way.

WALKING ON THE NARROW ROAD
The New Year came and I went to pray at the church as I usually did at the beginning of New Year. I did not thank God for my father’s conversion; I apologised instead. I said sorry to God for limiting Him. I thought my father too difficult to be converted. In fact, I even prayed for God to have mercy if he entered the fiery lake.

My father’s conversion not only proved God’s calling, but also his might and faithfulness. From that day on, I declared that nothing is impossible for God. I accepted the calling and went to a Bible school. After three and half years I came back, got married and became a full-time pastor in Fellowship Church of Neak Loeung.

In my very limited experience as a pastor, walking the narrow road helps me understand what the Apostle Paul said in Philippians 3:13; he wanted to finish his race. Many times along the way, the need to be significant, recognised, and comfortable has dragged me down and pushed me towards the wide road. As God has already done his part, I long to finish mine. May God grant me faith, joy, and courage to finish the walk.