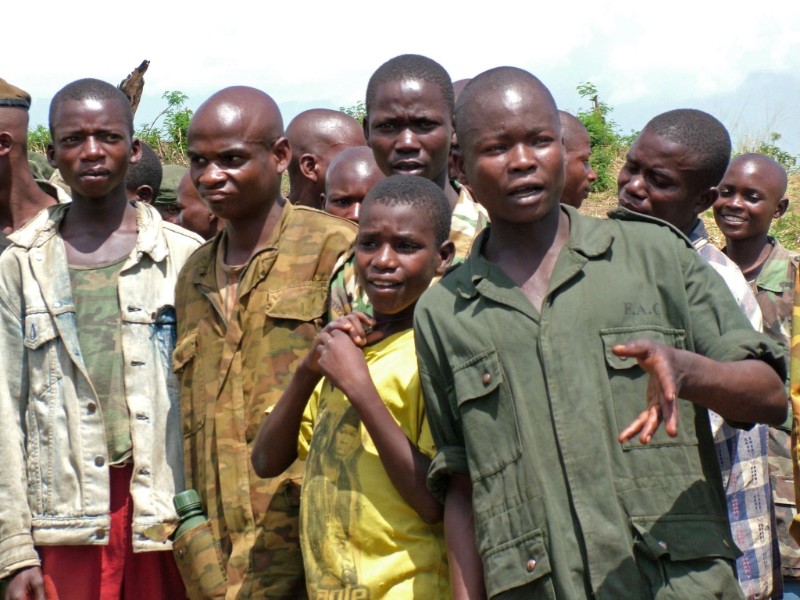 Tens of thousands child soldiers are used by rebel groups. They are forced into these situations by abuse, threats, financial privileges, etc. They are normally deadly and extremely ruthless soldiers.

Story
?
Nigeria’s military authorities have identified Ali Goni, 15-year-old, as the deadliest Boko Haram Islamic terror group’s fighter “who had mastered various techniques that can cause the maximum destruction of lives.”

In an interview, on Monday 2 July 2018 with News Agency of Nigeria NAN, the teenager, Goni claimed to have specialised in building more than 500 underwear Improvised Explosive Devices (IEDs) which have been used by underaged suicide bombers in northeast Nigeria by the Jihadists fighting to institute Islamic Sharia law in the country. Army intelligence sources disclosed saying that the suspect is the most innovative bomb maker to emerge in recent years.

Goni said he was kidnapped from his village Bama, near Maiduguri, the Borno State capital and home base of Boko Haram Islamist, when he was about 10 years old, in primary six, and taken into the Sambisa Forest where the terror group is still very active.

“I was kidnapped along with my mother in Bama’s Kawuri Street by Baba Kaka, a dreaded Boko Haram commander. They took us to Sambisa Forest and kept us in a camp called Kwalfata,” Goni said.

He said he wanted to refuse the training but “they said they would kill my mother the way they killed my father when they stormed Bama. So, I eventually agreed. During the training, many of my colleagues died while trying to make bombs. In the end, I emerged the best of all. ” We underwent various training in the camp. During our induction training, I was selected to be trained on bomb-making techniques, bomb detection as well as identifying and demobilising explosives.”

The teenager said. “My job was to make many bombs that would be used for suicide missions. I was working under the supervision of Baba Musa, a 70-year-old man. Musa also taught me the new technique of making underwear IED with a padlock.”

The 15-year-old said he was able to learn quickly and became an expert in building the bombs, his skills kept him alive because he had paid careful attention in building the bombs and not accidentally detonating them. He blamed carelessness as the cause of death in other teenagers in the Sambisa Forest.

The young boy said: “I managed to escape when the military bombed our camp in Baga. I ran to Cameroon where I surrendered to the Cameroonian forces. I was later handed over to the Nigeria military.”
? ?
“At some point, I was the only bombmaker when all those I was trained with were killed by the military during several attacks. So, they took me from camp to camp to make IEDs for suicide missions. I was in Kangarwa, Pulka, Banki and other camps.”

Goni is now in a rehabilitation camp in Maiduguri, the capital of Borno State undergoing de-radicalisation. The army will not permit his picture to be taken.

UNICEF report says Boko Haram has kidnapped more than 1,000 children in the past five years, some as young as 10 years old who have been used as suicide bombers, child soldiers, sex slaves and domestic workers.

Young underaged girls were mostly used as suicide bombers in 2017 to avoid detection as they walk into crowds and military outposts.